A patriarch’s ostensible suicide will pique the interest of an eccentric detective who will make everyone in the family reveal their darkest secrets.

Two major pleasures we’ve had in Thanksgiving 2019: An evening full of American football and Knives Out. Focusing on the latter, writer/director Rian Johnson offered a refreshing take on the ‘whodunit’ crime/mystery genre. He topped it up with comedic characters and hilarious shenanigans and the result was highly entertaining. Brilliantly written, directed, edited, and acted. I can’t say with certainty which actor stands out because… everyone does! And that’s what happens when almost everyone has worked with someone else in a different film and there is no bad blood at all. Well-paced, with everything falling into place as it should have. Despite the far fetched (to my liking) revelation, it definitely is one of the best films of 2019. I take my hat off to all cast and crew in front and behind the cameras. I’m not saying anything else!

Gather your family, your friends, your pets, your other half, all of them or none of the above, get something to eat and drink, and place your bets. See who’s gonna get it. Regardless of what I or anyone else thinks, it definitely worths your time and might rejuvenate your passion for the genre and might, just might, take you back to similar masterpieces of the past such as: Gosford Park (2001), The Usual Suspects (1995), Murder by Death (1976), Sleuth (1972), And Then There Were None (1945), The Hound of the Baskervilles (1939) up to The Last Warning (1928). 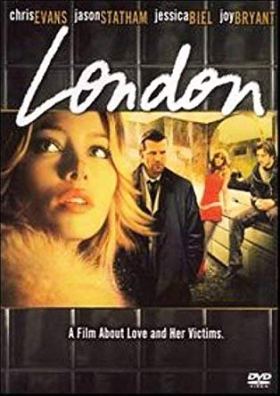 Let me introduce to you writer/director Hunter Richards. Is he well-known? No. Should he be? Definitely. What for? “London”! Unknown too? It shouldn’t be.

Addressing mostly the Hollywood lovers, “London” focuses on three characters portrayed by two actors and one actress who are known to be action heroes and one of the hottest women alive respectively. Chris Evans, Jason Statham, and Jessica Biel have been fully humanized, “made redundant” to people next door, and deal with everyday issues that you and I are troubled with. No heroes, no celebrities here.

“London” takes place profusely in a house party’s toilet where:

Statham and Evans steal the show. They look at each other in the eye, are not afraid to go berserk, and their characters find mental and spiritual/psychological ablution. A brilliant cinematic reflection on how real-life introspection can be turned into a liberating life’s unfolding.

You can find it here: https://amzn.to/2tS0IrH