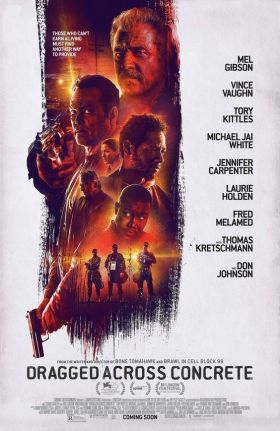 Two suspended cops descend into the criminal underworld as they both struggle financially.

After Bone Tomahawk (2015) and Brawl in Cell 99 (2017), Dragged Across Concrete is not the shock to the system his previous two films were but lands on screen in a time that “political correctness” has reached its peak. A slow-burn action/crime/drama which infuriates but also entertains with solid acting, writing, cinematography, editing and directing. Realistic and surrealistic dialogues which make one think, in either case, how on Earth did he come up with that (or why on Earth didn’t I think of that first)?!

With reviews as low as 0 and high as 10, you won’t find much in between. Don’t listen to anyone though (yes, not even myself)! Watch it and see where you stand in this world of violence, corruption, rights but no obligations, and opinionated masses that no matter what you say or do will offend… someone.

The world is what we make of it. I vote for communication and respect.

You can find it here: https://amzn.to/2Q2VCSc