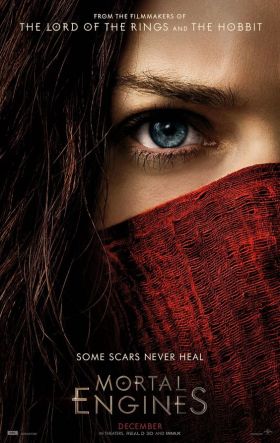 Hundreds of years from now, the world as we know it has been destroyed, the remaining cities have been mobilised, the major cities are hunting down the smaller ones, and two youngsters do everything in their power to change the status quo.

I’ve spoken before about budget and creativity as I have spoken before about the transferrable problems of a script to the big screen. I guess it was meant to be a saga but chances now are slim to none. Remember the “Golden Compass” (2007)? I’m not surprised. Mortal Engines‘ visuals are stunning. Hands down. The cast does a pretty decent job too; that is not a problem either. What was it then and it bombed?

Every time I watch a film, I’m always looking for that shot. The shot that will make me say “damn”! And then I’ll have to rewind and so can watch it again. What I’m also going for is a good line. Something that will make me say “I wish I have thought of that”! So, when independent films with 1/50 of Mortal Engines‘ budget have both, and “Mortal Engines” has none, it is only natural not to be impressed. To add insult to the injury, the same applies for the editing. Not only is there not even one good montage sequence, but the whole film feels rushed. It feels as if it got “chopped” fast to flush you non-stop down the FADE OUT.

Just “From the Producer of…” won’t cut it. Because as a household name, if you bring it up, you have to live up to your expectations and the reputation that precedes you. Shame really. Not for the money thrown away really, but mostly for the actors who want to catch a big fish, they let the small ones go, and they end up catching a boot.